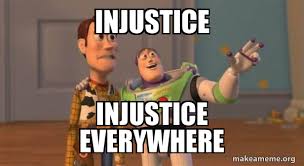 At a hot time in politics, I want to clarify a few things. I have friends I dearly love on both sides. I have personal reasons that were a real impact and caused my family great harm as to why I stand up for certain things. I state facts. I do not talk about what I do not know. A few things I do know.

2006, Jeb Bush was Governor, Charlie Crist then Attorney General and Republican, stepped in after that. 2010 Scott was elected.

David Gee, Hillsborough County Sheriff was in office when Keith Berisford and his brother started stalking me in 2006. I plead for protection and they refused to arrest him no matter what he did, stalked my children, broke into my home, stalked us everywhere it was terrifying.

I filed for a protective order and one was granted in 2006, however, Keith was stalking me at the courthouse and violated the protective orders immediately stalking also my children. They refused to arrest him.

Few months after stalking started, my family members were murdered. approximately at this time fourteen years ago, approximately October 28, 2006.

Richard Nugent, Hernando County Sheriff, State Attorneys,(Brad King) (where the murders happened, refused to investigate after I informed them of the stalking previous to murders in Hillsborough County immediately after the murders in November of 2006. I could not understand why they were not taking action.

2008, two years later, while Richard Nugent was still in Sheriff office, Brad King is still State Attorney, they then wrongfully arrested my son, claiming now they were not aware of stalking. They slandered us all over the media saying my son confessed. He did not, yet they would not release the ‘so called confession’ because it did not exist. They falsified the arrest affidavit and it did not match the video. Still, the twin stalkers, Berisfords, not ever arrested one time and they continued to stalk. I told them they were making us a target, they said my son said he was with them that was a lie he was not but they made us further targets of violence by implying that all over media. 100% lies. I did not know they could do that.

October, 2008, Six months after the wrongful arrest of my son, my brother was critically brain injured. Pasco/Hillsborough County. Coincidence? NOT.

The Berisfords have resided in Pasco County, Hernando and Hillsborough, and all of these counties are fully aware and have not taken action and I have talked to all 3. The Berisfords have never been arrested for any of their actions of violence and stalking against our family. I am still stalked, cyberly and physically.

As far as I am aware, they are all Republicans. So, you tell me where you think I stand politically and why. Many of you have seen me be terrorized, many of you are very aware of my story. Many have very strong opinions, but are you REALLY personally aware of what is happening by these people? If so, please reconsider your values.

THEN Rick Scott, Pam Bondi, all aware, what has been transpiring. NOW Ron DeSantis, Ashley Moody. Very Intentionally, refusing to do a DAMN THING.

Why? I do not know. What I do know is that it has been extremely corrupt and terrorizing to us and everyone around us.

I have continued to plead with anyone and everyone for help, because what choice do I have? Look what you all have done to our lives. Look what they did with their power.

My opinion, public positions used for personal gain or favor for their friends. It has certainly not served our communities. And I have been very proactive and visited many shelters and programs, trust me, this action is global and State wide, it is not just happening to me. Many have been killed, harmed, injured or live in terror for the same reasons I do.

I will be kind and not say some things that I really think of these people. I will say, I believe in God and if you do you should really consider who you support. Because every single public official person I named on this post cannot possibly be spiritual or they could not have intentionally and very cruelly, terrorized my family. Intentionally as they have caused great harm to all of us. I expect that stuff from criminals and I have heard of corruption. I have now had to personally live their greed.

I am in no way trying to influence you, I can back up everything I say, if you would like proof, I will give it to you. So do not think that my opinion is based on political rhetoric. It is based on watching them do this, watching the terror and injuries and chaos they intentionally caused and the harm to children screaming and crying you bastards, how dare you?

So, please do not even think about insulting me for what I think politically unless you can prove to me why I should think otherwise of any of these people. I do not think you can.

Who they are working for that set this in action is certainly not the public because the public is being further endangered by their inaction to take power from these dangerous predators.

So please, I just ask you to really, take into consideration what I am sharing, it is truth. If you know them ask them, what and why is this happening?

See if they can back it up and give you truth or if they just blow you off and cannot give you facts. Or if they try to continue to lie to you and victim blame some more ask for their facts then fact check them.

My prayers were that some would decide to do the right thing eventually. Unfortunately, I have not had that experience, it has just gotten worse.

I keep trying, I keep praying and holding onto hope that we will someday get justice for our family. I post this every election, 2020 is status quo. My opinion, because public official leadership has remained the same politically, until the root issue changes, nothing will change. It takes courage to speak up. It is not easy, but it is necessary if we back up our talk with actions. I back up what I say and I stand against injustice. I hope you do the same.